The Best Ways to Get Your Kids to Declutter WITH YOU!

I recently learned a valuable lesson, my kids can learn how to get rid of toys on their own.

Every year, before Christmas, we go through my kids’ rooms and prepare them for the new toys coming in. It works.

Every year, both my children have birthdays a few months later, and I do NOTHING to prepare for the further onslaught of gifts. Maybe I think there’s no preparation needed. I mean, Christmas was just a couple months prior.

How much has changed? Yet, every birthday, there is a deep need in our house to get rid of old toys.

When I first decided to declutter our home and simplify my life, I was on a mission, and I really didn’t care about anyone’s opinion on what stayed and what had to go. I was ruthless, and I’m only a little apologetic for getting rid of my family’s things.

I learned some valuable lessons during that time like to start by decluttering my bedroom and my stuff first. Starting with my own stuff first would have prevented some heartache.

I did what I call, nap-time purging. I would get my kids all excited to take a nap in the same room, and then I would start getting rid of toys in the other room. It worked. They were young, and I don’t think they even noticed.

The problem is, they are no longer young toddlers. They are in elementary school, and they notice when their old toys magically disappear. 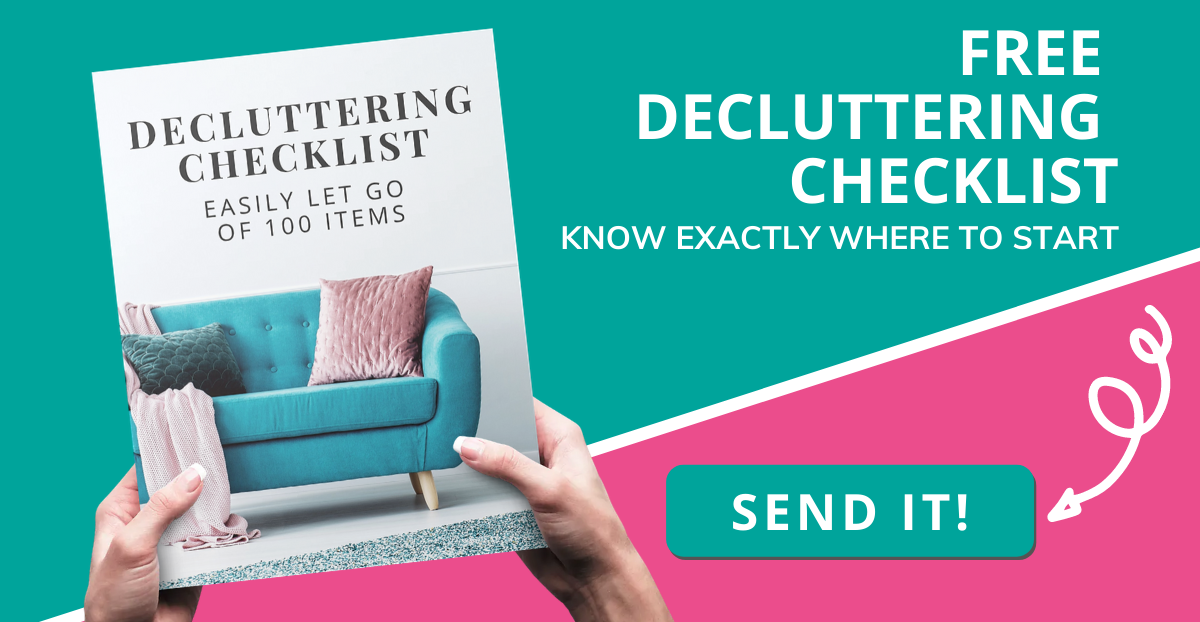 To involve your kids or not when getting rid of toys?

I may have lost it recently. You know the rage cleaning that hits when you’ve finally had enough? I was ready to walk into my kids’ rooms with trash bags and load up the car for a Goodwill run in order to get rid of toys. Acting within reason was out the window!

My sweet, dear husband reminded me to take my own advice and not to get rid of all of their toys while they were at school. He was right, but I did initially doubt his more tactful method.

I fought the urge to grab a trash bag and waited for my children to come home from school. On the way home, I mentally prepared them.

We were going to pick out five toys to get rid of and give away to make room for their new birthday toys. Just five. They could do this much. They reluctantly agreed.

How to get rid of toys without whining: Let your kids pick the toys to donate

When we got home, we got to work.

I suggested they start with their bins of stuffies, which were overflowing. How?! I don’t even buy stuffed animals or dolls anymore. I swear they reproduce while the girls are at school. I digress.

Each girl started to go through their bins and to my surprise, they each found five stuffies to give away. I praised them with each choice as I sat on the bed and watched, letting them have full control.

Use these strategies when getting rid of toys

When you are teaching your kids how to get rid of toys, start with the easy stuff.

Sometimes, this may mean starting with the baby items. Most kids are super willing to get rid of stuff clearly for babies, especially if they are trying to be a “big girl” or “big boy”.

Next, start with getting rid of old toys that are clearly in abundance. This trick works well when you have a container they can go in. I give my kids a limit, the container. Once it is full, it is full. They seem to be able to work with this concept well.

Finally, try giving your kids a number. Pick five items or ten items to donate. Having a concrete goal to work with, rather than just saying, “We need to get rid of toys!”, works wonders for their little minds.

Sometimes, your kids will surprise you when it is time to get rid of toys

While my kids were getting rid of their old toys, my youngest gave me an ultimate surprise. She suggested we get rid of her Doc McStuffins hospital. This toy takes up a lot of space and she’s too big for it, but she still played with the pieces in it, even though the toy itself was way too small for her.

I’ve wanted to find another home for this toy for at least a year now, but I didn’t want to make that decision for her. I was blown away. She told me we should keep the doctor’s pieces, but she knew she was too big for the hospital.

Elementary-aged kids can get rid of their own toys

My takeaway after this experience was big. As my kids grow, I need to trust them to make their own decisions about what stays and what goes. When they were little, I did it for them.

Kids still need a little guidance when learning how to get rid of toys, but they can do it.

They’ve seen the benefits of having less. They know they have more space to play and we have more money to do fun experiences. However, to watch them decide what stays and what goes was fantastic, and I was very proud.

Even at their still young ages, we can teach our kids how to let go of items that no longer bring them joy. We can stop the cycle of hoarding clutter because of sentimental value.

If your kids are purging their own toys, please be a good example. If they want to get rid of a toy, don’t try to convince them otherwise.

I found myself wanting to hold on to toys because of sentimental value. Then I asked myself, why? Why do I really want them to keep this toy? They haven’t played with it in months, and they are freely electing to get rid of it.

I’m pretty practiced at dealing with the emotions of decluttering, but I still fall victim to them. Before you speak and try to convince your child otherwise, think about why you want to keep something.

Raise a Happy Kid, Not a Well-Funded Kid

How Fewer Toys Will Benefit Your Kids

How to Manage Toy Clutter in 9 Simple Steps (Guilt-Free)